The John Burggraff Family in the USA

John Burggraff’s great-grandfather, Nikolaus Bourggraff, was born in 1705 in Trotten or Troine, a little village near Clerveau in the northern part of Luxemburg. John was born in Helzingen, Luxemburg, the 22nd of February, 1832. He married Josephine Schackman (Jacquemain) of Belgian descent. 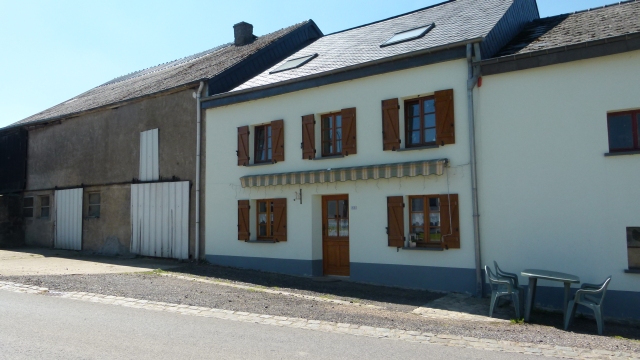 The house in Helzingen or Hachiville Luxembourg, where John Burggraff was born. 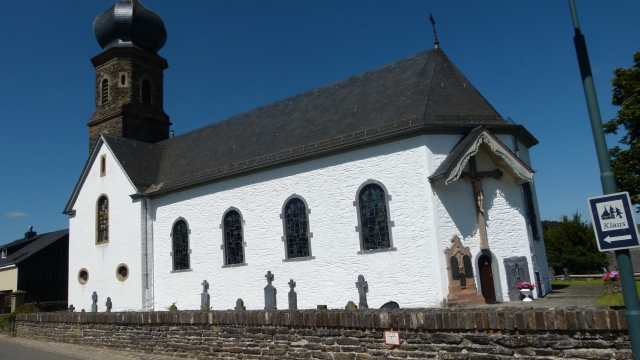 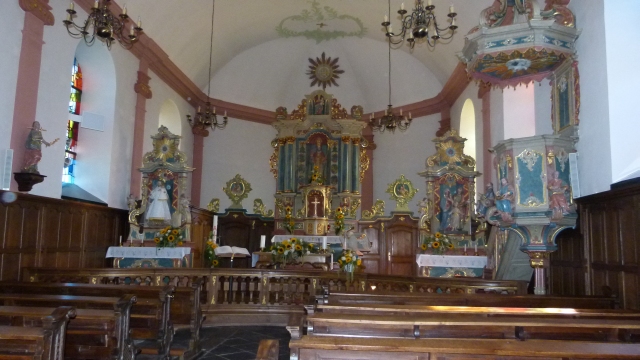 After their marriage, John and Josephine immigrated to the new world. Initially, they settled in Canada where they lived for a while. Sometime between 1860 and 1869 they left Canada and took a train to Michigan. They settled on a farm, but their stay was limited to about one year, as they disliked the country. Their next move was to the state of Minnesota. The journey as far as Anoka was made by train. This was as far as the railroad extended. The journey from Anoka to St. Cloud was made by a team of horses. John and Josephine had 9 children. Nickolas and Henry were born in Canada and Charles, Mary, John Jr., Bertha, Christina, Elizabeth, and Martin were born after they moved to the United States.

When the Burggraff family first arrived in St. Cloud, the main part of the town was located in what was then the site of Lowertown. John took rooms in the "Student House", then located near the 1936 site of the orphanage. This plot of land was at the time laid out for the St. John`s College. John did some carpenter work whi1e staying in St. Cloud and during his spare time he scouted around the county looking for an ideal homestead site. John soon located a homestead site near Opole Holding Township in Stearns County. They proceeded to build a log house, barn and dog house. They grubbed (cleared) the land and used oxen for their farm work. Henry, with his brothers and sisters, attended school in a small log school house located on Spunk Brook, just about one mile east of Opole.

After five years they left the farm and purchased 100 acres of land in Two Rivers Township, two miles east of North Prairie on the Spunk River. John

built a saw mill which he operated until 1884 at which time it was carried away and destroyed by a heavy flood. Soon after, he replaced the saw mill with a flour mill, building on the same ground. It was one of the first, if not the first flour mills in Morrison County. Farmers brought wheat by oxen and horses from near and far to have it ground into flour.

After John disposed of his interest in the mill, he purchased a partly improved 200 acre farm in Two Rivers Township. It was located southeast of North Prairie on the river road. Originally, a house stood on the place, while John added the rest of the farm buildings. He cleared some of the land. He used horses for his farm work. John farmed there for ten to twelve years. He then divided the farm between his two sons, John Jr., who stayed on the home place and Charles, who received part of the farm without buildings. In 1890, John Burggraff Sr. moved to North Prairie, where he built a home and resided there until his death. When the first small log church was set up at North Prairie, John built the sacristy.

John and Josephine’s son, Henry, who was born on March 7, 1860, married Mary Thomalla on June 7, 1879 in North Prairie, Minnesota. Henry and Mary Burggraff had 12 children: 9 sons and 3 daughters. 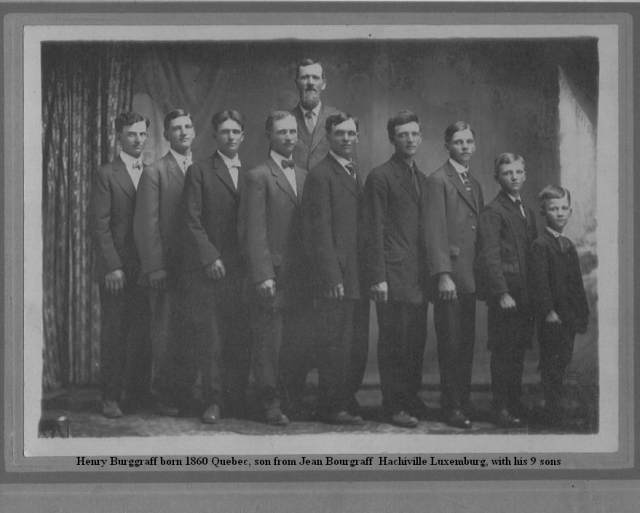 In this picture you will find Henry Burggraff, and his sons from left to right; Edward, Albert, Joseph, Richard, Nicholas, Peter, Aloysius, Roman, and Claude. His wife, Mary, and their two daughters, Otilia “Tillie” and Margaret “Maggie” are not pictured. Another daughter, also named Margaret, was born in 1885 and died from diphtheria when she was 3 years old. 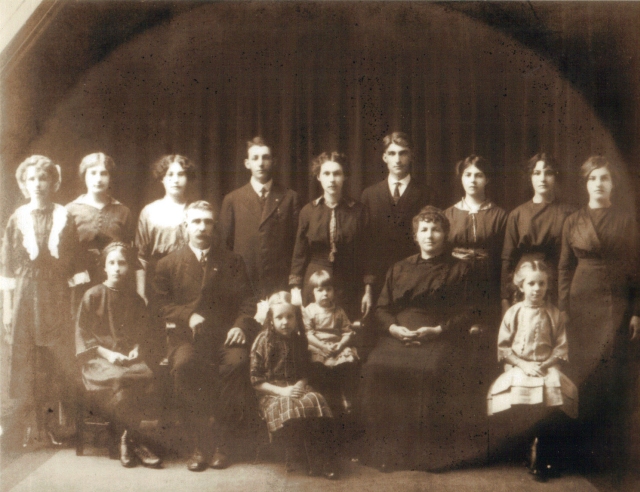 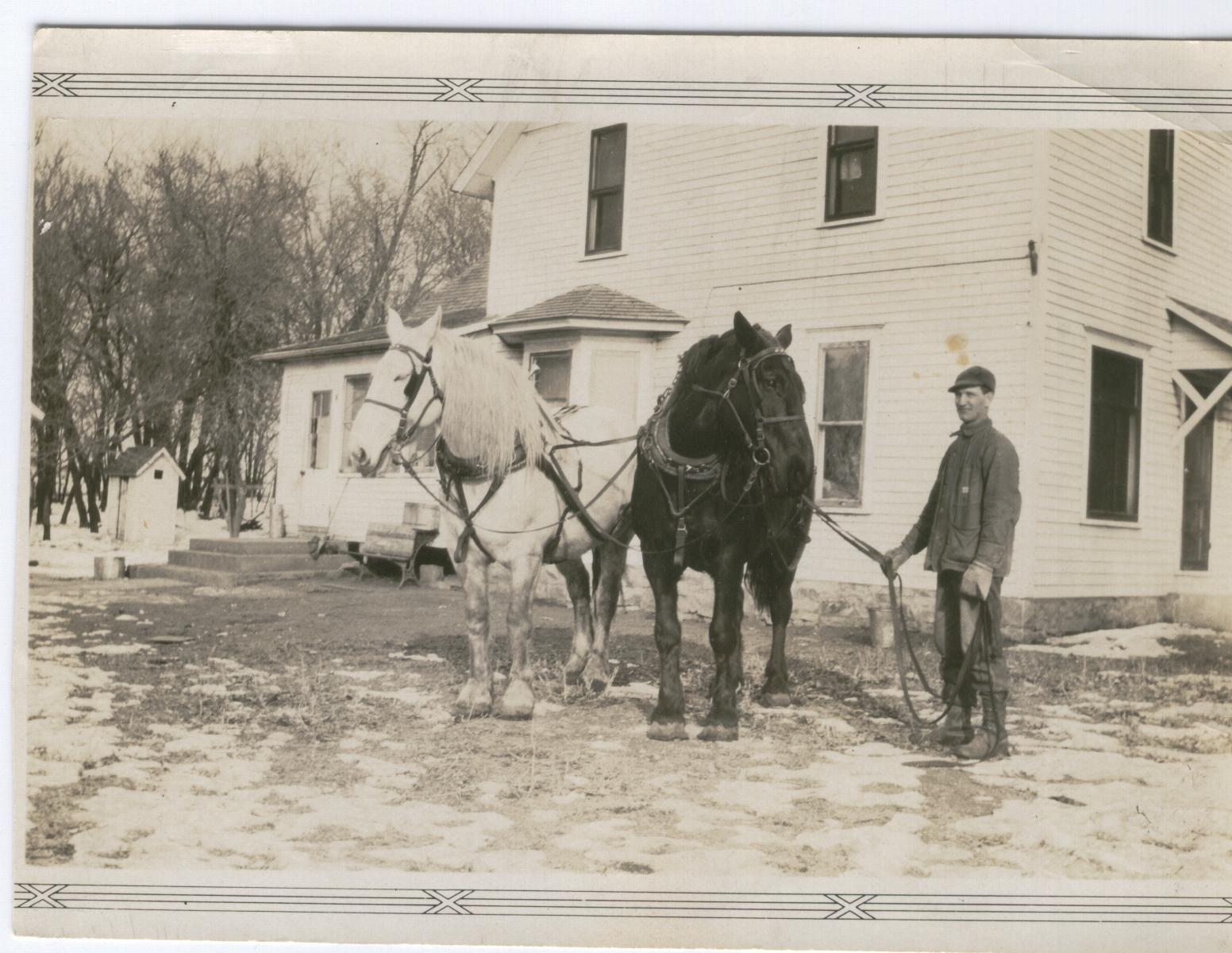 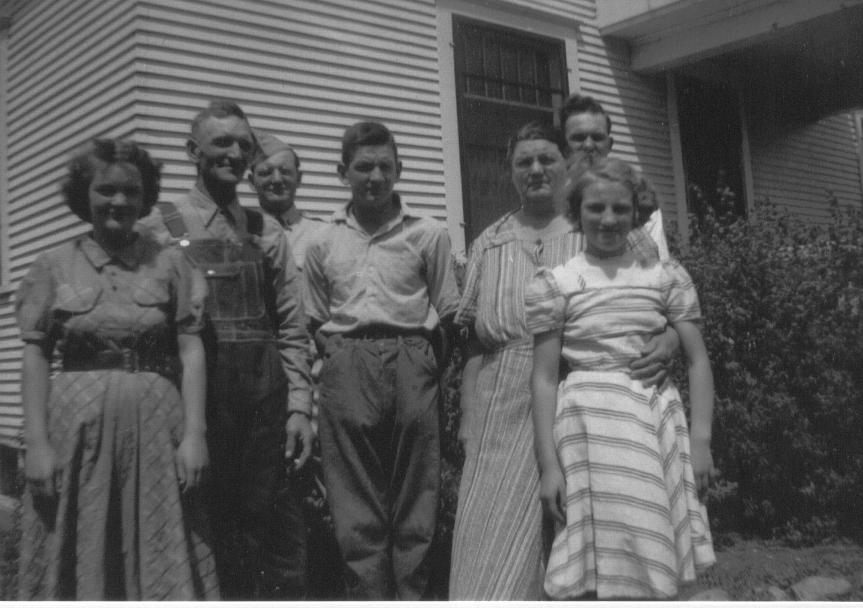 Albert, who was born on May 11, 1896, married Mary Siemonsma on January 5, 1927 in Sioux Falls, South Dakota. They farmed near Hartford. Their children were Henry Francis; Joseph Peter; Aloysius George, who died at the age of 8; Dolores Marie, who died when she was 3 days old; Mary Ann, who died on the day she was born; Bernard; Dolores Louise; and Lorraine Ihlene. Albert passed away August 23, 1974 and his wife, Mary, passed away on March 22, 1968. They are buried at St. George Cemetery in Hartford, South Dakota. 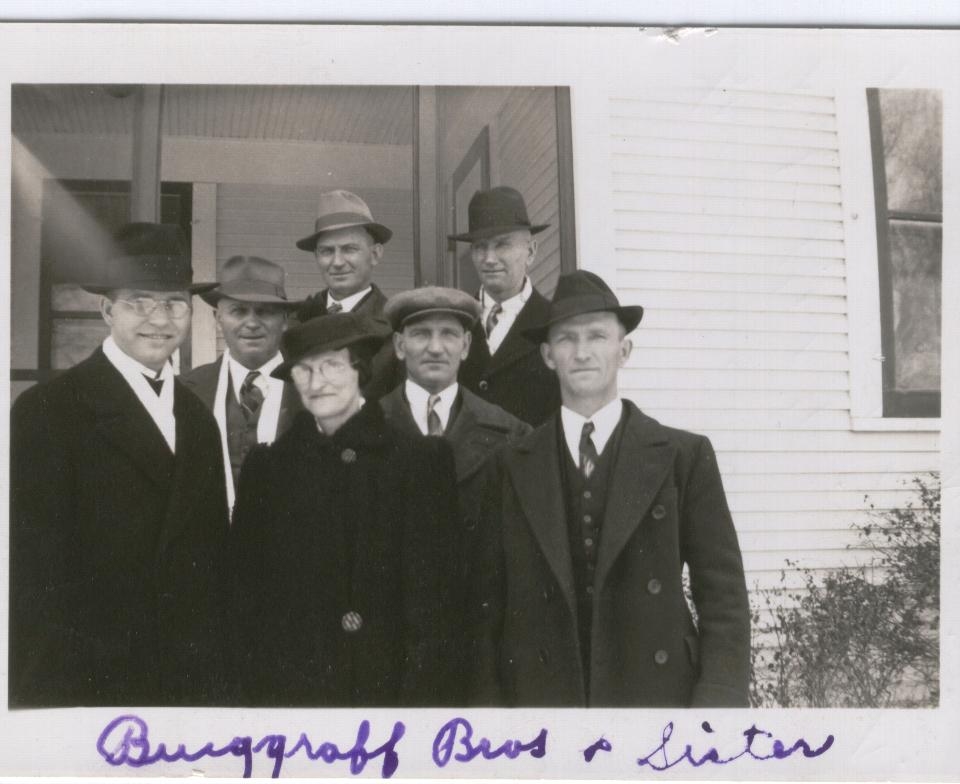 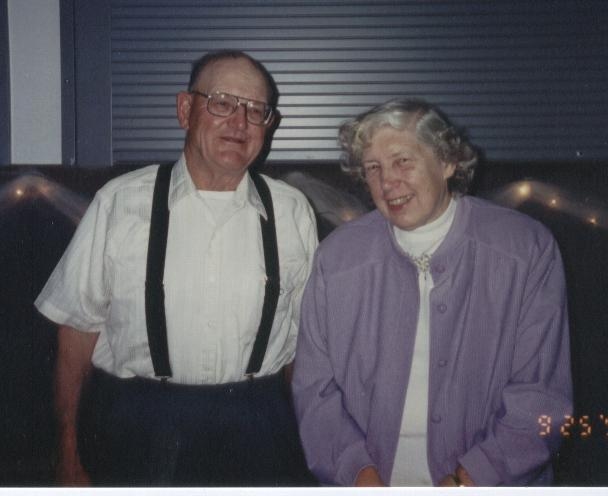 Henry and Dolores Burggraff farmed near Egan, South Dakota. They grew corn, soybeans, and hay. They also raised cattle and hogs. They are the parents of Marilyn, Frank, Lonnelle, Wayne, Lloyd, Karon, Gordon, and Glenn.

Frank is the great-great-grandson of John (Jean) Burggraff. Frank Burggraff and Lynda Bokker were married January 28, 1978 in Dell Rapids, SD and raised their four children on a farm southeast of Egan, South Dakota. Their children attended school in Egan, SD, and later in Flandreau, SD. Frank is a farmer and raises corn, soybeans, and hay. He raised hogs and cattle. He also raises and sells Black Angus bulls. Lynda is employed at Avera Medical Group Flandreau in the medical records department in Flandreau,SD

The Family Frank Burggraff his wife Lynda Bokker and their Family 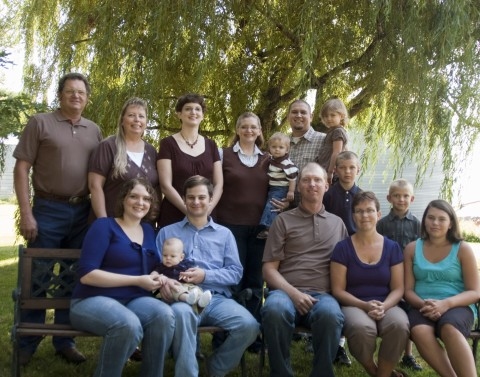