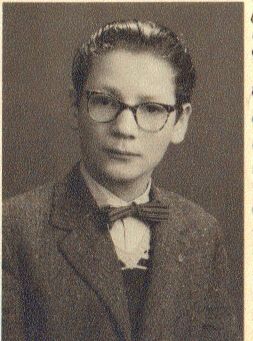 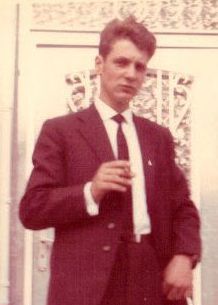 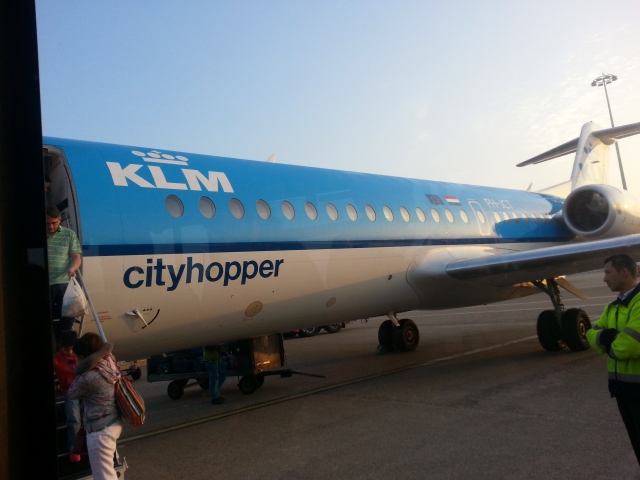 ptember 30th 2013 the time had come. My wife Gertrud and I had packed our suitcases to start the trip to America. Many preparations had preceded it. So we had already started to brush up our fallen asleep English two years earlier with evening classes. Contacts with American relatives had been established for several years. In Lynda Burggraff Bokker from South Dakota, we found the right contact. She was planning to organize a Burggraff family reunion. This should take place near you, in Dell Rapids. So we flew from Luxembourg via Amsterdam to Minneapolis in Minnesota. 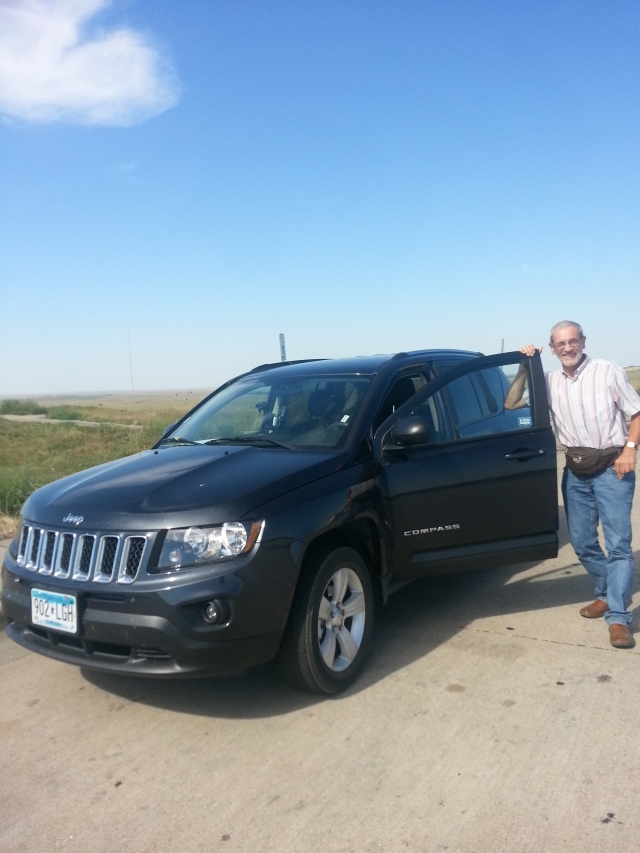 When we started there with our rental car, a great little jeep, we couldn't believe it: we were in America! The first time in our life! A dream had come true. I remembered how difficult it was for John Bourggraff when he left his home in Luxembourg around 1860 and set off with his family for the New World. For us the trip didn't even take a day, but Jängi was on the ship for weeks into an uncertain future.

Now we rushed 65-70 miles (100-110 km) over the huge highway towards our goal. In the meantime we had been on our feet for 15 hours and had about 400 km to go. But the new adventure kept us awake. When we bought drinks in a shop on the way, we were pleasantly surprised by the friendliness of the Americans. When we arrived in Fall City that evening and finally found something to eat in the small town, we fell dead tired but happy to bed. The impressions on the first day were: Everything is big in America: the streets, the squares, the huge corn and soy fields, the cars ... About 50% of the cars were heavy pickups, plus lots of beefy SUVs and only a few small ones Cars.

The next morning after a hearty breakfast, unusual (pancakes, fruit, bratwurst) but tasty,  it then went to the farm of Frank and Lynda Burggraff. When we got near their farm, 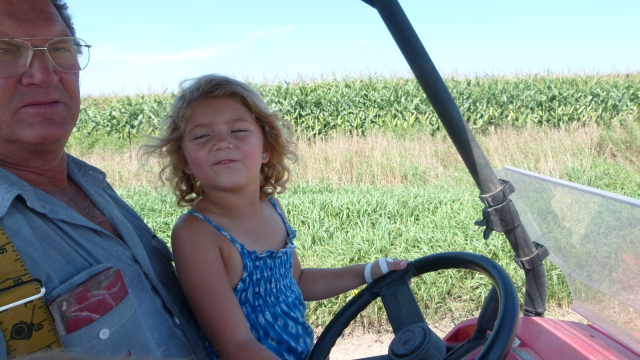 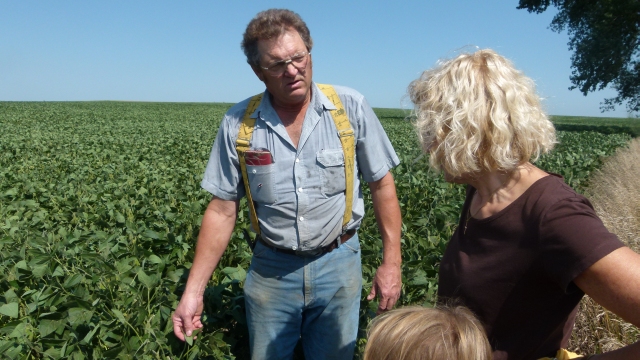 having driven several miles of gravel roads through the corn fields, the Navy told us we were there. But our relatives' farm was not there. So we drove a few miles further through the fields and suddenly saw a mailbox with the name Henry Burggraff. As we drove into the courtyard, a giant came towards us. I said in my bumpy English: We're from Luxembourg and we're looking for Frank Burggraff. He replied: "I am Glenn Burggraff, Frank is my brother.Thanks to his help, we quickly found Frank's farm, where we were warmly welcomed. The farm was isolated, surrounded by a lot of land ... Giant tractors and machines could be seen ... everything was big and heavy. But we felt extremely comfortable and even today, when I think of the warmth of the people, tears come to me ...

Frank showed us the farm, explained what he was doing and his little granddaughter drove us through the fields while sitting on Grandpa's lap.  In the evening we met other children of Frank and Lynda in Sioux Fall's and looked at the waterfalls there. The Melcher family, who we met in autumn 2012 when they were visiting Germany and Luxembourg, had arrived from distant Illinois (900 km) and we ate together in a Texan restaurant that evening. 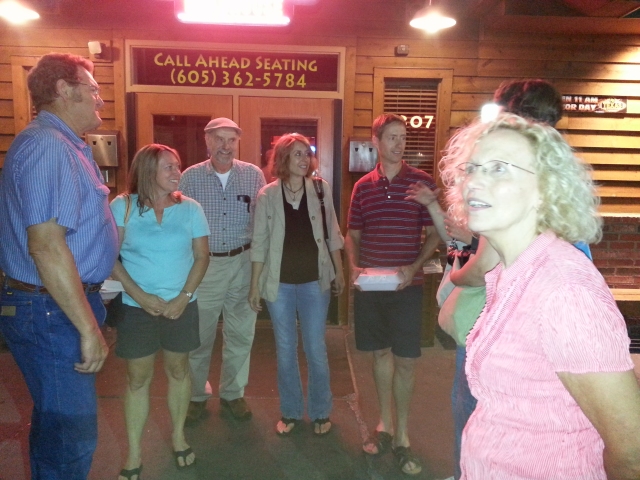 The simplicity of the Americans amazed us. The restaurants were simple but plentiful and inexpensive. The clothes are 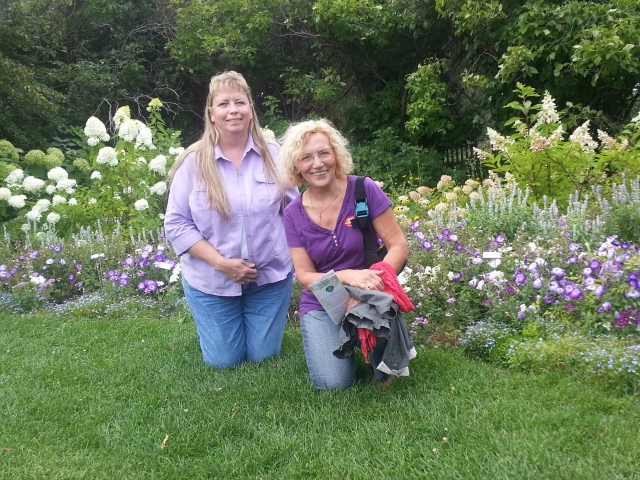 more casual and practical. We were also amazed at the cleanliness of the villages and towns we passed through, there was not a piece of paper on the road…. 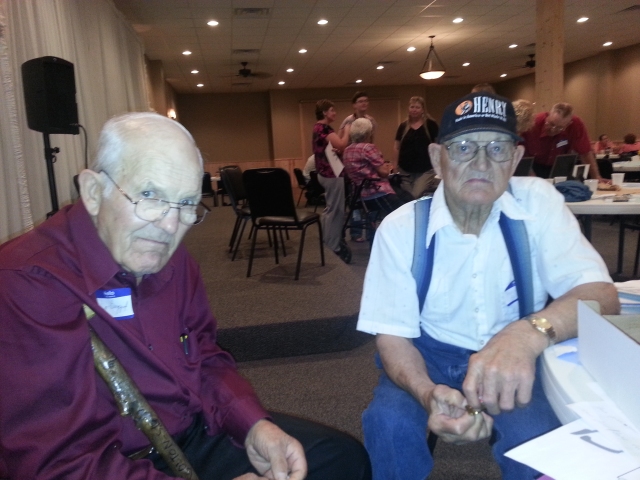 When we came to the Burggraff meeting the next day, we were greeted with great warmth. A whole hall full of Burggraff! Although we didn't know anyone 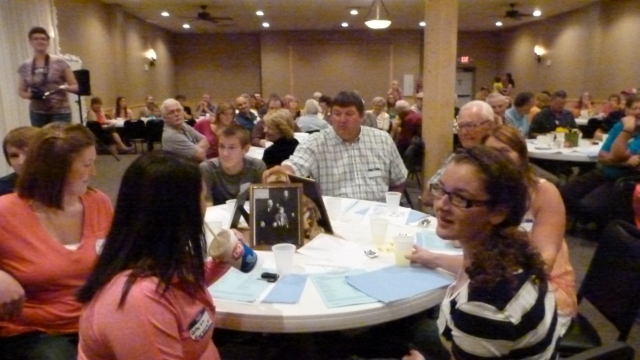 except Lynda and Frank's family and the Melcher's, there was an immediate feeling of family belonging. When you consider that their common ancestor, Nikolaus Bourggraff, was born in 1705! It was a great pleasure for us to talk to the old people and to exchange information about the relatives.

Gertrud and I sang the "Hemecht", the lux. National anthem and a song by emigrants who were homesick for their home in Luxembourg. I felt a deep bond with my American relatives. When I think about the fact that 70,000 people emigrated from Luxembourg in the 19th century, most of them to the USA, I am very grateful that they found a new home there. Remember that in Minnesota, 60% of the population have German-speaking roots. The next 2 weeks Gertrud and I crossed 5 states and experienced a lot of beautiful things: in South Dakota, the Badlands, a magnificent rocky 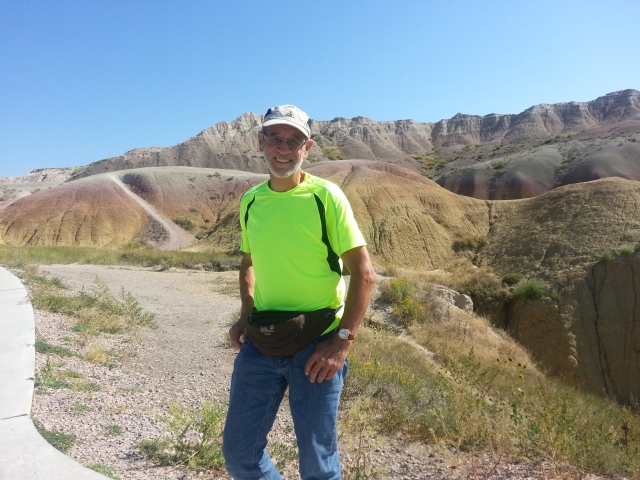 landscape; or a "Prairie Homstead" 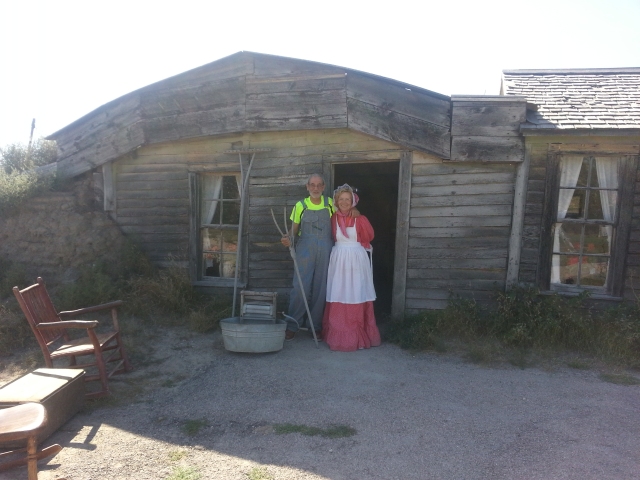 ...This is an earth house with a stable and barn as the first settlers built.

Also Mount Rushmoore with the heads of some US presidents carved into the rock. Deadwood, a former gold rush town, where you can still see some houses from the gold rush times. To the delight of our grandchildren, we visited the “Laura Ingalls Home” in SD. Laura Ingalls describes her family's life in Minnesota, 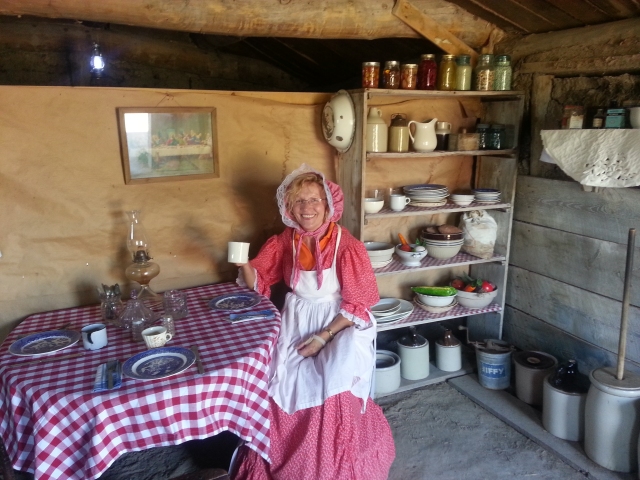 Wisconsin and SD in the books "The Little Farm". I, Gertrud, was overwhelmed by the sight of the Missisippi stream that we suddenly saw on a hill in front of us in the valley. We visited the "Corn Palace" in SD. A large former granary, the facade of which is redesigned every year, only with different colored corn and cereal grains and small tufts of straw and hay. Image This year, among other things, a nativity 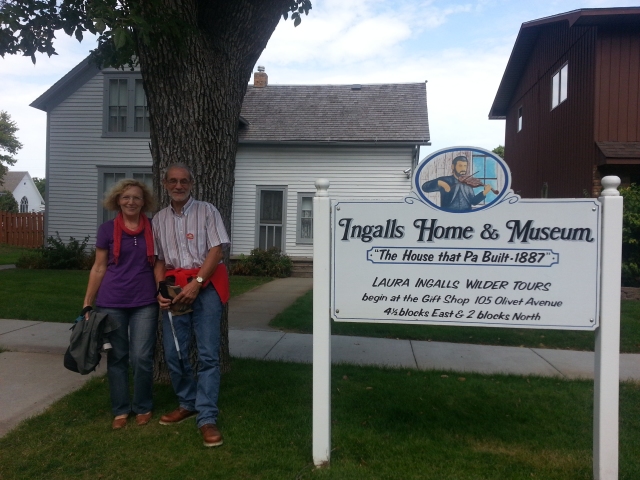 But the best thing was the encounters with the various relatives. With every farewell we had tears in our eyes and we hope to see many of them again at the next family meeting in Luxembourg. Besides the relatives, we got to know very nice people, to mention only the Smitt family fro 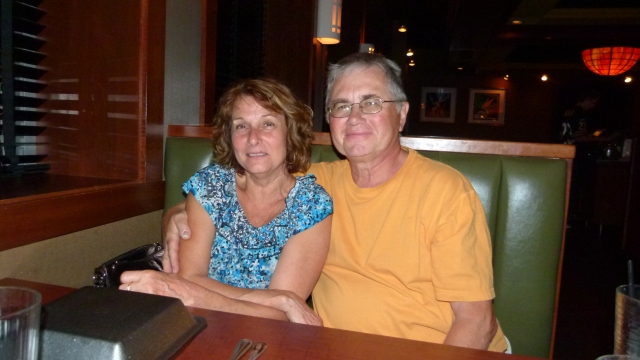 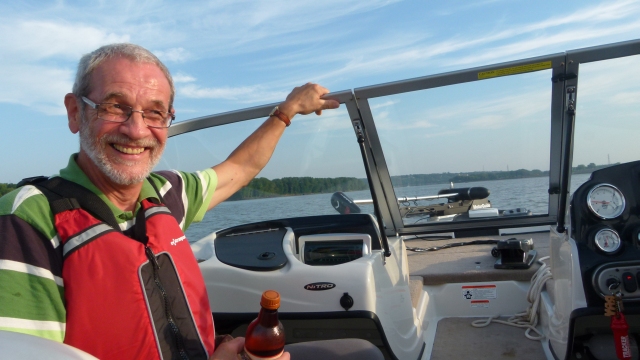 whose ancestors come from Luxembourg. They spontaneously invited us to take a boat trip over the Mississippi for several hours.

When we passed an old paddle steamer, I felt like Tom Swayer and Huckleberry Finn. The Smitt's will come to Luxembourg next year to get to know the places of their ancestors. 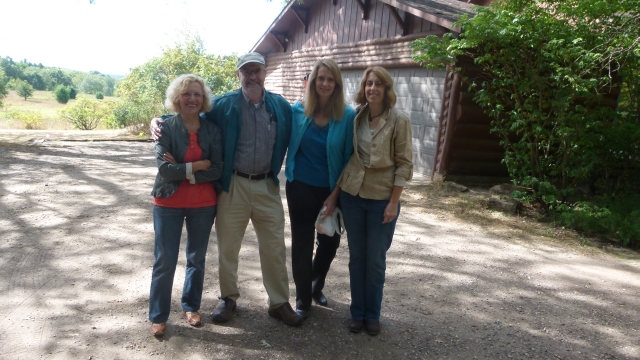 Michelle and Dan Melcher showed us the city of Chicago. A grandiose city

on Lake Michigan with many sights. My grandfather's brother-in-law, Jean-Michel Reuland, had a shop there at the end of the 19th century. As his daughter Sophie once told me, he delivered bread and made a lot of money there. In Naperville, Michelle Melcher showed us the church she and Dan attend. A large, modern church with around 1200 seats, where four masses are held at the weekend. There are 4 Catholic churches in this city, as well as 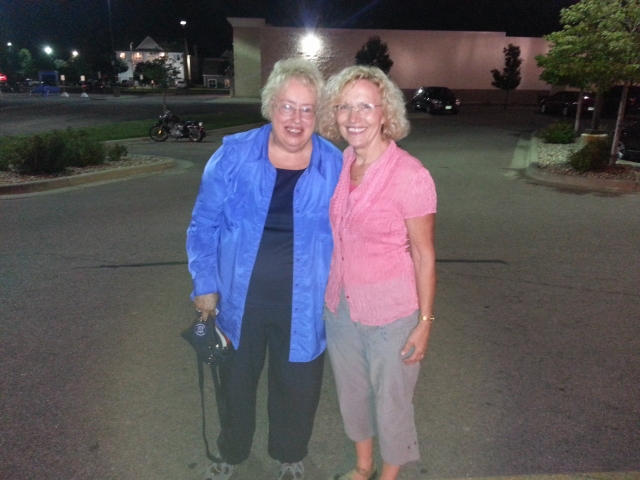 Lutheran, Baptist and many other free churches. In the services we 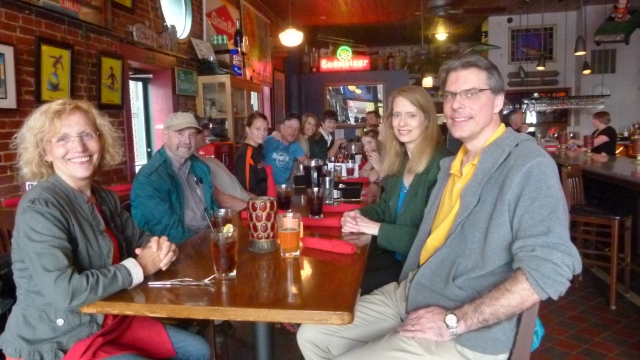 were pleasantly surprised by the informal nature of the worshipers and how frankly the Americans are of their faith.

In Wisconsin we visited the Luxembourg emigrant center in “Belgium”, which was very interesting. Finally, we would like to express our thanks.

Thank you, Tracy Burggraff, you established contacts with the USA via Facebook. Thank you, Lynda and Frank for your hospitality, for the family reunion, for everything you showed us in the days that followed. You were a gift to us.

Thank you Michelle and Dan for your hospitality, for Chicago, for spending time with you. We felt so comfortable with you. You have such lovely children. Thank you, Mary and Douglas, you too spoiled us as your guests. Thank you, Tery, you and your husband gave us delicious food. Thank you for seeing Eau Claire and your children's theater performance. Don and Marlene, you can be proud of your children. Don, it was nice to see you again. Marlene, we were happy to meet you.

Thank you, all Burggraff relatives who were at the meeting, you were all great!

Tim and Elisabeth Hanson, you have traveled a long way. It was nice to meet you.

Charles Van Hove, Thanks for the Burggraff family's American tree.

Through your work, the American branch has been added to the Luxembourg family tree.

Thanks Bryan Tassava, you provided your guitar.

When we returned our rental car on the last day at the airport and checked in on our way home, we were very grateful for these encounters and also a little proud that we managed to travel to a far, foreign country all by ourselves at our age.

We had prayed for a long time for this journey and continue to include all our relatives in our daily prayers.